Christmas came early for us at Footie First with the Borussia Dortmund Football Camp held from 5th to 9th December, 2018 at Cooperage. Not only did our coaches have fantastic opportunities to learn directly from Dortmund trainers, but some deserving children from our Social Responsibility Program also enjoyed invaluable training time with coaches from Germany’s leading football club. Further, our team was also chosen to assist the Dortmund coaches while conducting the football camp, which enabled us to spend a considerable amount of time working closely with the German staff. The icing on the cake, though, was meeting World Cup-winning German legend, Lothar Matthaus, on the first day of the camp and spending a few minutes kicking the ball about with him! It was unreal and some of us had to really pinch ourselves to believe it was really happening. 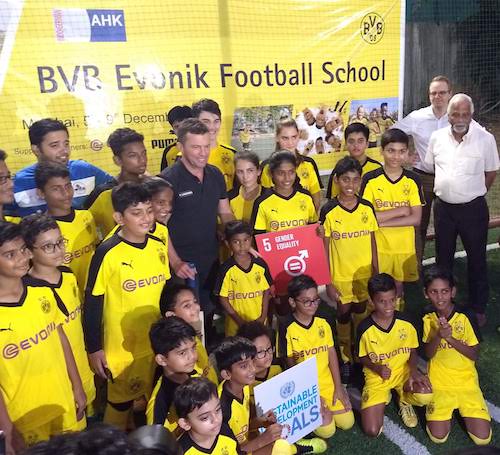 This camp, made possible by the tireless efforts of the Indo-German Chamber of Commerce, was hosted by WIFA and supported by specialty chemicals giant, Evonik. Coach Markus Pasdzior from Borussia Dortmund led the training sessions while boys and girls from across Mumbai gained insights on how to improve their technique and skills all while having fun. One key aspect of Dortmund’s coaching philosophy that the children learned is to ‘train as you play’. This means training with full commitment and giving 100% as though it were a match situation.

Another important point the Dortmund coaches highlighted was the importance of agility and coordination along with mental alertness at all times. While football is played on the pitch, matches are often won in the space between a player’s ears. Strength, power, speed, technique and skills are necessary but not sufficient attributes to become a good footballer. However, when these capabilities are combined with a constantly ticking mind, intelligence, awareness and good decision-making skills – the results can be astounding. This is reflected in Dortmund’s training philosophy from the moment children join the academy setup.

After spending over 25 hours across 5 days with the Dortmund coaches, the children were left with a lot of new areas to improve upon. Coach Markus helped the kids to open up, question and understand why they performed certain drills and activities making the learning experience far richer and more immersive for everyone. As for our Footie First coaches, you can be sure that we will be introducing some new activities and games that reflect our learnings from this wonderful camp conducted by Borussia Dortmund.